It is hard to beat My Survey when it comes to absolute reliability as it’s among the first survey panels that started paying people for their personal opinions. And since it’s been consistent at doling out payments over such a long period, I’d recommend reading this review of My Survey.

About MySurvey, the Company

Formerly known as NFO MySurvey (National Family Opinion), the company has been collecting market research data in the United States and in many other countries such as Canada, UK, France and Malaysia since 1946. However, the company launched its online panel in 1995.

Want $5 Free?
Join InboxDollars. They pay you for things you already do (watching videos, shopping, surveys & more). Plus they give you $5 for free just for joining.
Join InboxDollars & Get Your $5 Now

The company is owned and operated by the marketing research giant Lightspeed Online Research, Inc. a global leader in gathering market research data.

It should also be noted that there was actually another online panel named Lightspeed owned by the same company, but a few years ago the company merged the two together and whats left of the two is now known as MySurvey.

I also looked at company’s profile on the Better Business Bureau’s site and not surprisingly MuSurvey enjoys an A+ rating from the BBB. There were about 29 complaints in total, of which 26 were related to “Problems with Product / Service”. But thankfully, all problems were solved and every single case has been closed which goes to show the company does care a great deal about its panelists and its image as a reputed market research panel.

How Does My Survey Panel Work?

If you’ve ever been around any survey website like Ipsos iSay survey, Opinion Outpost or any other, understanding how My Survey works will be quite simple and straightforward. The first step requires you to sign-up with their website by filling up some simple forms. Furthermore, you will be asked to spell out some of your personal details and demographics. Once this is done, you can start answering different surveys.

Although this is akin to any other website like SurveySpot surveys, MySurvey.com differs in one small but important factor. The site follows the points system to calculate the payment due to you. Now I can already hear some of you grumbling about how it would’ve been a lot easier had they just paid you a certain amount of dollars for every survey completed but trust me when I say this, My Survey’s reward points system is not bad at all.

As someone who has been making money off surveys for quite some time now, I know that the reward points system can become a pain. However, My Survey differs in the sense that it handles the entire points system in a very transparent and simple manner. What further eradicates any doubts about this system is the fact that My Survey is completely legitimate.

This means that you can just as easily redeem your points for cash without facing any of the well-known issues with reward points system, viz. rejections, being ripped off and made to wait unreasonably long for the payment.

For every 1000 points that you collect with My Survey, you are eligible to be paid $10 via PayPal. This is as easy as it can get.

The amount of points you can collect depends upon a lot of different factors just like with any other surveys for money website, with some of them being:

One of the main things that sets MySurvey apart from other panels such as Global Test Market and Survey Spot is the fact that they do not force you to fill out long and boring profile surveys. Instead they use short pre-screeners to find out if you qualify for the given survey or not. And the best part is that even if you do not qualify for the survey, you still get some points for going through the pre-screener.

One of the coolest things about being a member of this panel is that they now have a mobile app that you can use to participate in their NEW mobile friendly surveys on the go. I love this feature because there are many good uses for this app. Say you are at a bar or a restaurant waiting for a friend to show up, instead of sitting their being bored, you can pull up the MySurvey app and earn a few dollars taking a survey. 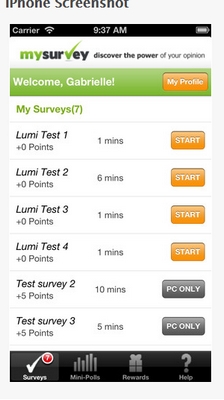 Online Reviews from Other Panel Members

I always take special care to ensure that my reviews are balanced. This means that apart from my own personal views, I also tend to scout for views and reviews of other users on the web. This helps me arrive at a complete and unbiased (remember that I too am an active Survey junkie) conclusion.

The following is what I was able to find:

The most important criterion by which any survey website is judged is the payout it offers. My Survey scores quite well in this aspect although its points system does tend to tarnish the experience somewhat. And as has been mentioned before, the conversion rate for points to cash is $10 per 1000 points. There have been multiple occasions when I have made close to $50 per day taking about half-a-dozen 500 point surveys. That’s a good payout for a couple of hour’s work and although My Survey allows redeeming points for stuff like shoes, TVs or even clothes; I prefer to be paid cash.

Surveys can become boring if you are taking them for extended periods of time like me. Although this is not an issue for newcomers, people like me are more than just appreciative of the emphasis My Survey lays on keeping its surveys fun and engaging. I’ve noticed this thing about My Survey from the very beginning and it’s heartening to know that the site where you take surveys for money actually cares about your overall well-being.

My Survey also draws up prizes every now and then, which are given away to its members. Although most other survey sites require you to be an active member to be eligible for winning such a prize, My Survey is different as it allows you to be a part of any contest even if you are inactive for an extended period of time. And even though I’m yet to win anything, I know for a fact that even a single win can translate into a lot of points.

My Survey also boasts of an excellent customer support team that not only responds to your queries quickly but does so in a most courteous manner. They also periodically come up with innovations like focus groups and product testing in their market research surveys to infuse greater variety into the process.

Another positive thing I have seen so many people talk about is their famous $4000 Grand Prize (awarded several times a year) entry that’s awarded to you every time you login to your account and people do actually win.

The one negative thing that I keep coming into while reading other reviews of the site was about the late payment delivery. Most members complain that it often takes about 7-14 days to receive their PayPal payments (and I can attest to that as that’s been my experience as well). That said, every member was quick to point out that nonetheless they have always been paid

Should You Register with Them?

As I always say in all my reviews of various sites, the ultimate decision rests on your shoulder and you should always do your own research and not solely rely on mine.

That said, I would certainly recommend trying out My Survey (provided you are at least 14 years or older) as it’s quite reliable and has a proven track record when it comes to payments. However, as is evident from my review, there is no denying that My Survey does have its Achilles heel just like most other online panels do.

Want up to $5 per completed survey? Then join MySurvey panel. It is the site where I have made the most money as a survey taker.